Whessoe Engineering Limited > News > The future of a famous North- East engineering firm has been secured after it was bought by a major Asian company.

We’re on LinkedIn - find us on your favourite networks to hear about our latest news using the links below.

The future of a famous North- East engineering firm has been secured after it was bought by a major Asian company.

THE future of a famous North- East engineering firm has been secured after it was bought by a major Asian company.

Whessoe Projects, which has its roots in Darlington dating back to 1790, is now part of Korea-based Samsung C&T (Construction & Trading) – a division of the Samsung corporation. 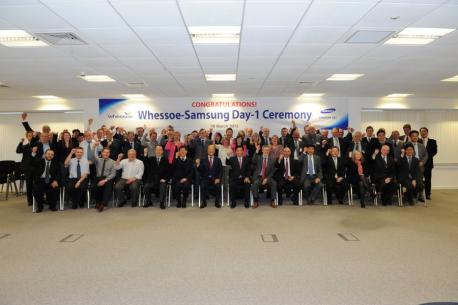 The deal safeguards the future of Whessoe’s 60 staff and will lead to at least 100 jobs being created at the Morton Palms site, in Darlington, over the next three to five years.

Samsung wants to invest millions of pounds in technology to revive the fortunes of the company, which makes massive storage tanks for the oil and gas industry.

The Whessoe name will be retained and the company will continue to be run by its existing management team, led by general manager Wilf McNaughton. A new chief executive, Steve Kim, will be based at the site and a chief finance officer, engineering coordinator, human resources and marketing bosses will join in the coming weeks.

Whessoe had been running at a loss under previous owners Al-Rushaid Group, of Saudi Arabia, which has been trying to offload the business for the past three years.

“It’s fair to say that this company had been run into the ground,” said Mr Kim, who has been making regular trips to Darlington from his base in Toronto, Canada, as the deal neared completion.

..“We are delighted to have Whessoe, which has a fantastic reputation around the world,” he said. “At Samsung we value heritage. We understand the history of this great North-East company and we want to nurture it and help it grow for years to come.

~Together we are stronger, and will become the most innovative and successful company in the gas sector~ – Yeon-Joo Jung

“The talent of the people here was a key factor and we will look to recruit many more people to make this business even stronger. You have excellent universities in Durham, Teesside, Newcastle and Sunderland and we look forward to working with them to ensure we have the highest quality staff.”

A deal with Samsung was nearly signed last year before it collapsed at the final hurdle.

But bosses at the Korean company said they were determined to land a piece of North- East industrial history and a protracted period of due diligence was completed yesterday with the signing of a contract for an undisclosed sum.

To celebrate the landmark, all Whessoe staff were given a Samsung Galaxy tablet and last night they joined delegates from Korea, including Samsung C&T chief executive Yeon-Joo Jung, for dinner at the five-star Rockliffe Hall Hotel, near Darlington.

Mr McNaughton, who has been with the firm for more than 30 years, was delighted to have agreed a deal following what he admitted was a very challenging period over the past four years when more than 300 staff left the company.

“This deal is a vote of confidence in the skills, knowledge and innovation that this historic company has delivered and continues to offer.

Being part of Samsung will open up new markets for us all over the world. It’s a great day for Darlington and the region.”

He confirmed that the firm would be looking to recruit as many local workers as possible and he hoped to rehire skilled staff who had left the business during its downturn.

The company’s apprenticeship scheme will be restarted and investment will be made in research and development.

Mr Jeung said: “Together we are stronger and will become the most innovative and successful company in the gas sector by hiring even more of the best British engineering talent in the next few years.”